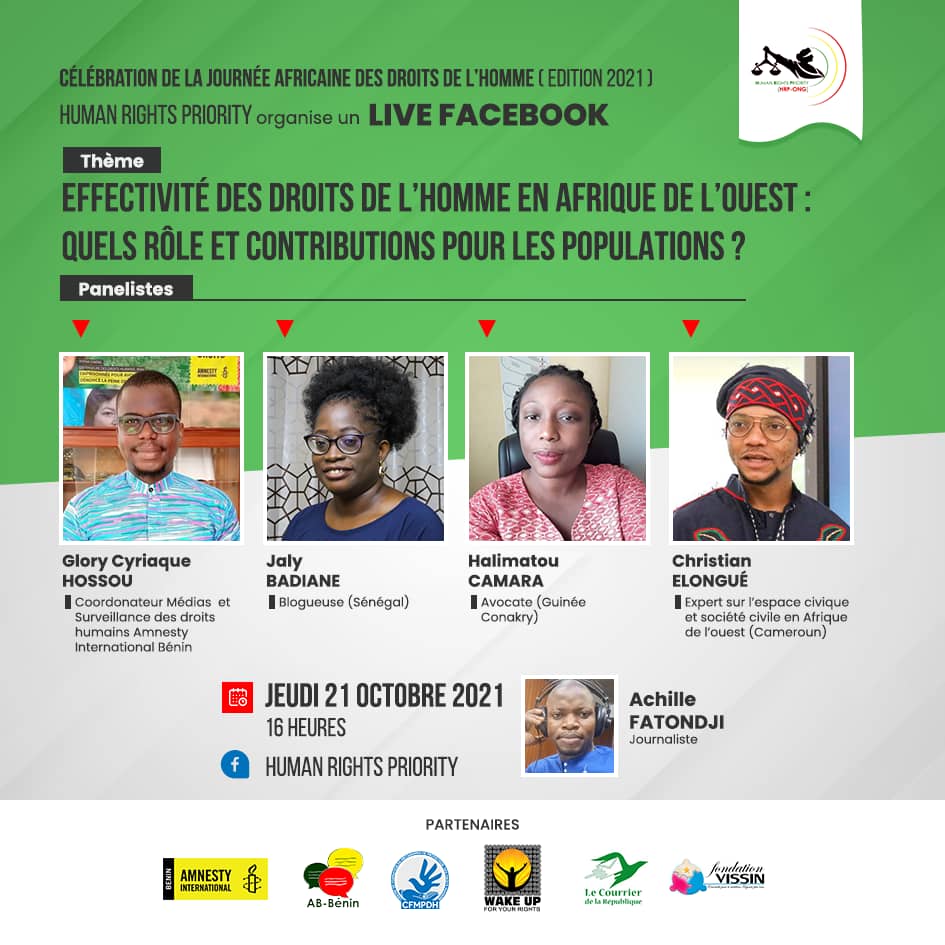 The African Charter on Human and Peoples’ Rights came into force on 21 October 1986. This date has been declared, and is being celebrated annually as an African Human Rights Day.

The 2021 Africa Human Rights Day is celebrated amidst the global COVID19 pandemic. The experience of many people across the continent also shows that COVID19 has brought a huge human and peoples’ rights consequences. The pandemic has highlighted the pervasiveness of the socio-economic deprivations affecting the masses of our people. We have come to realize that under such conditions of deep structural weaknesses of our societies, the most widely used public health response measures could not be effectively
implemented, without leaving the most vulnerable from the scope of these protection measures.

This year’s commemoration of Africa Human Rights Day organised by Human Rights Priority by the executive Director Miguele Houeto and her entire team, is an important occasion to reflect on these and related issues. It presents us the opportunity to show not only why COVID19 is also essentially a human rights issue but also why human and peoples’ rights are the foundation for achieving the ideal of Agenda 2063 and the sustainable development goals of ‘leaving no one behind’

During the panel sessions, we exchanged on the fact that civic space remains open in only two of Africa’s 54 countries. The reduction in safe public spaces in which democratic debate can take place represents a breach of citizens’ digital rights and makes achievement of the Sustainable Development Goals (SDGs) impossible. Below are key facts worth mentioning from the session:

When citizens open online civic space, governments close it down.

For example, since citizens used SMS text messages to organise politically in Tunisia and Egypt in 2011, governments in 50 African countries imposed compulsory SIM card registration. The ability to access and make productive use of digital technologies is uneven across gender, income, and ethnic groups, such that its patterns of use reflect, reproduce, and amplify existing intersectional inequalities. Women activists and politicians often face sustained abuse and violence if they are vocal online, creating a chilling effect.

The rise of ‘digital authoritarianism’.

Many West African governments have executed internet shutdown and disruption technologies. Politicians are using digital technologies to inflame ethnic division and drown out democratic dialogue and debate. This closes civic space and diminishes citizens’ rights to freedom of opinion and expression.

Existing research on the closing digital space in West Africa is insufficient.

I personally believe that the human rights movement is needed more than ever in Africa, but what if the movement has lost its way and is no longer fit for purpose, not through lack of effort, but through outdated perception?

In a world where the law is often broken with impunity, without shame, should we seek to renew commitment to the rule of law at scale, and if so, how? In a world where democratic processes are used to consolidate plutocratic power, what do we want government of the people, for the people, by the people to mean?

In a world of data-driven surveillance and manipulation, is it credible to think that people know their own minds and act in their own interests?😅 These are few daunting questions that speak to a new political reality we (Civil Society actors and social justice advocates) may not have the tools to make sense of or act on. There is therefore a need for greater engagement with key constituencies:

Hope the civic space shall be better in 2022 than what the existing CIVICUS Report on Civic Space reveals.

If you have a program or event where you will like to me to share more insights on the civic space dynamics in West Africa, feel free to email me at hello@christianelongue.com Some of my publications on civic space, philanthropy, accountability, digital rights etc are here

Until then, know your rights, defend them when violated and stay safe and blessed !